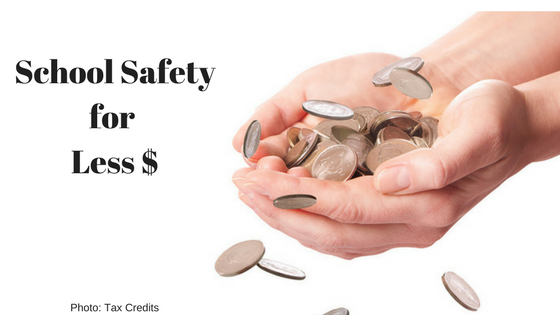 Are you thinking of making improvements to your school’s safety?

I want to let you in on a way to improve your school safety for less.

For the next few months, my loyal readers and followers can engage any of my services at prices that haven’t changed since 2012. That’s right – until the end of the fiscal year (June 30), I will honor my old prices for any booking or project that comes to completion by October 31. This gives you nearly 3 months to book, and over 6 months to host a training, purchase an online course for your staff, obtain a threat assessment consultation, or update your school safety plan.

As a lifelong educator dedicated to making schools better places for students to learn, and for staff members to thrive, I have always made sure that my services fit with schools’ tight budgets. Since founding Youth Risk Prevention Specialists 6 years ago, I have sought to provide outstanding school safety services at an affordable price and I have never raised prices. We all know that inflation is one of life’s certainties, and in order to continue doing this important work, I must make a few changes.

As violence threat assessment finally begins to get the recognition it deserves. I expect a surge in schools seeking this type of training. I have been doing this work for many years, and have obtained the education and experience necessary to provide the most current, research-based training and assistance to schools setting up threat assessment teams. There are many large safety companies that focus on a particular product or safety niche and I am concerned that they will develop “pop-up” threat assessment training services to complement their products or services. Even without adequate training or expertise in this area, they will likely get a lot of takers. Why? Because they have thousands of dollars to invest in advertising. A very small business like Youth Risk Prevention Specialists does not.

What I do provide is experience, knowledge, over-the-top service and customization to make sure you get exactly what you need to improve your school’s safety. I’ve worked nationwide with schools, organizations and the Federal Emergency Management Agency on projects that increased the safety of schools, workplaces and faith-based entities. I’m an active member of the Association of Threat Assessment Association (ATAP) and have been on the front lines of implementing violence threat assessment as a preventive practice in schools.

If you’d like to learn more about what Youth Risk Prevention Specialists can do to help make your school safer, simply click here for service descriptions and training outlines, or here to contact me with your specific needs. I’m happy to provide more information or answer any questions you may have. 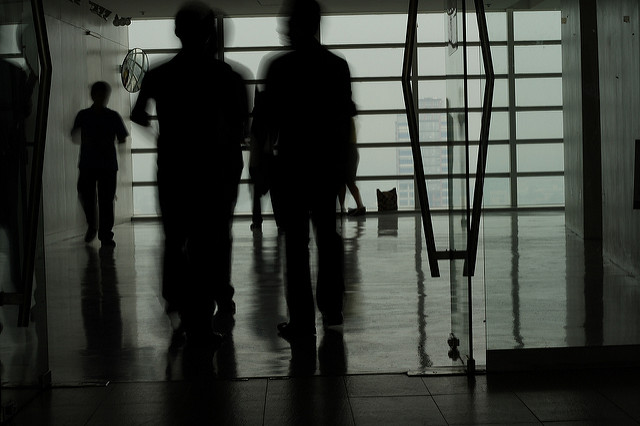 Today, there was a school shooting in my home state of New Mexico. Two students were killed, along with the gunman. This is the second shooting perpetrated by a teenager in New Mexico in the past 4 months. I’m worried there will be more, devastating communities across the country.

Not long ago, I reviewed research on the copycat effect of mass shootings. Mark Follman from Mother Jones has researched and written about something many are calling the Columbine Effect. Dr. Sherry Towers and her team found that mass shootings increased the incidence of similar events within a period of 13 days. It was noted that this effect is present in 30% of mass shootings and 22% of school shootings.

We are fast approaching the 5-year anniversary date of the Sandy Hook Elementary School shooting, and we’ve recently seen some devastating mass shooting incidents in our country. In these next few weeks before holiday break, we need to be exceedingly vigilant. We already know that being home for an extended period of time can be highly stressful for some students. We also know that the holidays, often fueled by alcohol and family issues, can be a time of strain and conflict. These stressors can intensify the vulnerability of a student or adult who is struggling.

If you’re not sure what you should be looking for, take a look at these resources for information about the warning signs of violence and suicide. Be sure everyone on your school’s staff is adequately trained to report concerns and that there is a team in place to evaluate, assess and intervene when necessary. If you need help with any of this, please don’t hesitate to contact me here.

Let’s all do our part to ensure a safe and peaceful holiday season. 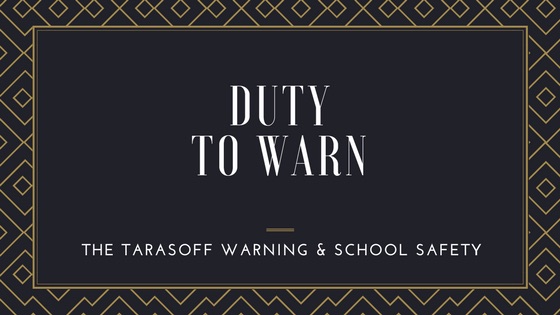 In my last post, I clarified the role of FERPA when it comes to the sharing of student information for the purpose of keeping others safe. If you are a counselor, social worker, psychiatrist or psychologist, you are no doubt familiar with the Tarasoff Warning. This legal responsibility stipulates that mental health professionals have a duty to warn if a client or patient threatens to harm someone. The Tarasoff Warning is the result of a case that occurred in 1969, resulting in the death of Tatiana Tarasoff.

In September of 1967, Prosenjit Poddar enrolled as a UC-Berkeley graduate student. He met Tatiana Tarasoff in 1968. They saw each other throughout the fall, but at one point, Tarasoff told Poddar that she was not interested in a relationship with him. Poddar began to stalk Tatiana. He became depressed and neglected his appearance, his studies, and his health. He often isolated himself, spoke disjointedly and cried frequently. This behavior worsened  throughout the spring and into the summer of 1969. Poddar and Tarasoff met only occasionally during this time.

Tatiana Tarasoff spent the summer of 1969 out of the country. After her departure Poddar obtained psychological help. He was a patient of Dr. Lawrence Moore, a psychologist at UC-Berkeley’s Cowell Memorial Hospital. Poddar confided that he planned to kill Tarasoff. Dr. Moore requested that the campus police detain Poddar, writing that, in his opinion, Poddar was suffering from paranoid schizophrenia, acute and severe. The psychologist recommended that Poddar be civilly committed as a dangerous person. Poddar was detained but shortly thereafter released, because he appeared rational. Dr. Moore’s supervisor, Dr. Harvey Powelson, then ordered that Poddar not be further detained.

In October, after Tarasoff had returned to the country, Poddar stopped seeing his psychologist. Neither Tarasoff nor her parents received any warning of the threat. On October 27, 1969, Poddar carried out the plan he had confided to his psychologist, stabbing and killing Tarasoff.

Besides the duty to warn, there is another takeaway from this story. Persons can appear rational at times and still be dangerous. In my staff training on threat assessment, we talk at length about impression management, a behavior at which a number of past school attackers have excelled.

Following a lawsuit initiated by Tarasoff’s parents, The California Supreme Court found that a mental health professional has a duty not only to a patient, but also to individuals who are specifically threatened by a patient. This decision has since been adopted by most states in the U.S. and is widely influential outside the U.S. The specific laws in each state vary slightly, and can be found here.

As with the exceptions to confidentiality that exist with FERPA, the Tarasoff Warning provides for disclosure of specific client or patient information to protect others. Both of these should serve as a guideline for sharing necessary information with others who have a need to know, in order to protect those who trust us to keep them safe on a daily basis. 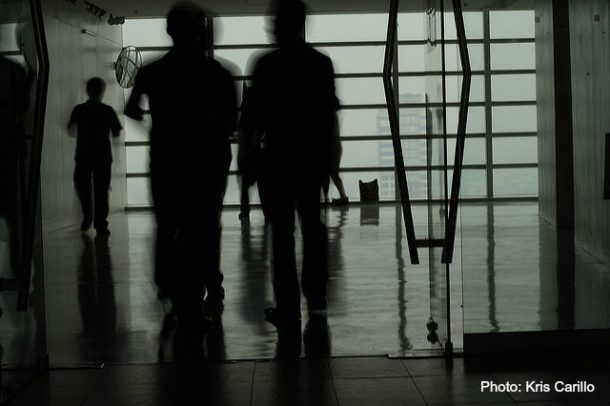 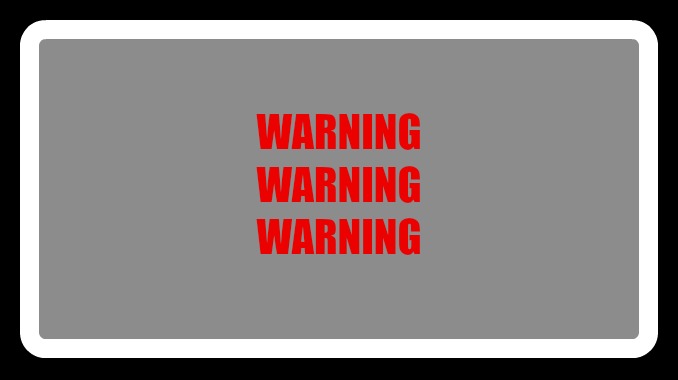 Each time we hear of another incident of targeted school violence, the following days bring news reports of warning signs that were missed along the path toward violence. Admittedly, it is extremely difficult, if not impossible, to predict violence. But, there are many signs of trouble that leave me nodding my head as I go through my mental list along with the reporter on the evening news.

In my workshops, I do not teach staff to predict violence, but to prevent it, by assessing dangerousness. Dangerousness is situational and fluid, and needs to be addressed when the signs are telling us that an individual is troubled and moving toward a decision to act in violence. Sometimes, we have a long window during which to act; other times, things move along rapidly. Knowing what to look for and having a plan in place to intervene can make the difference between life and death.

If you’d like to learn more about how to develop and implement this type of plan, simply click here.